Our speaker Laura Guillory will discuss the challenges many women face in pursuing STEM careers. She will share with you the challenges she faced and how she found mentoring and support from her teachers and managers at a time when women were discouraged from pursuing technical careers. Laura’s presentation will include a brief historical perspective of often overlooked women scientists and inventors who have contributed much to our society.

Laura Smith Guillory was born and raised in Washington, DC. She started elementary school before the desegregation of schools in Washington, DC. She attended Howard University where she obtained her BS degree in Physics in 1966. Laura’s pursuit of an advanced degree was interrupted when she and her husband, Prof. William Guillory, moved to Philadelphia, Pennsylvania and then to Salt Lake City, Utah. Laura obtained her Master’s degree in Physics in 1978 from the University of Utah. Her research involved the electrical stimulation of bone in slow healing fractures. That research laid the ground work for today’s standard medical protocols in fracture treatments. After obtaining her degree, she worked as a network systems engineer for AT&T. Laura held various technical and managerial positions at AT&T in Salt Lake City, Denver, and Los Angeles.

In 1989, Laura began working at the California State University headquarters as a network manager. Her next job was a computer systems manager. Please join us to see how Laura and other scientists managed careers with twists and turns. The October program will also include short reports from the Tech Trek campers the Glendale branch sponsored at Whittier College this summer.

From Rockets to GPS: The Career of a Scientist at JPL

Celebrating the 50 years anniversary of the “One small step for (a) man, one giant leap for  mankind”, the great achievement of the first human visit to the moon, our first meeting of the 2019-2020 year (September 14, 2019) will be devoted to the space investigations and career of a scientist involved in this effort. Our speaker is well known to most of us: he is Dr. Nabil Elgabalawi, husband of Mary Elgabalawi, our esteemed member.

Nabil Elgabalawi was born in Egypt in a modest household, the eldest of six siblings, whose father died when he was eighteen and his mother ten years later.  Nabil excelled in school and Cairo University accepted him in its aerospace department.

After graduating from Cairo University, he got an appointment in Germany as a flight-test engineer with the German fighter aircraft company, Vereinigte Flugtechnische Werke.  Nabil then moved to the USA, completed his Ph.D. in Colorado State University, and was offered a job at Jet Propulsion Laboratory (JPL) in Pasadena.    In addition to his remarkable career at JPL, Dr. Elgabalawi has had a distinguished career at the Aerospace Corporation.

In America, he worked on the design and launch of significant space programs including: launch vehicles currently in use by NASA, the USAF, and commercial satellites; the Space Station; planetary spacecraft including Cassini, Galileo, Voyager, Magellan, Mars Rover; and GPS (Global Positioning System).

In his exciting and timely talk, Dr. Elgabalawi will describe what inspired him to become an aeronautical engineer, what encouraged him to come to this country, and what exciting projects he pursued. Please join us in September to listen to our distinguished speaker.

Sylvia Becdach was born and raised in Burbank, California and has lived in South America and speaks fluent Spanish. Since 2004, she has been a realtor at Keller Williams Glendale specializing in the Glendale area, as well as Burbank, Studio City, Valley Village, Pasadena, Altadena and the greater Los Angeles areas.

Along with a close-knit team of seasoned professionals in title, escrow, finance and related disciplines, her team is there every step of the way. Sylvia knows that referrals are the driving force behind her business. Sylvia puts her energy, heart and soul into making each transaction a great experience for everyone involved.

Sylvia has 3 boys and 3 grandchildren and is a member of the Salvation Army Board of Directors, fundraising initiatives for L’aureole, and P. E.O. Sisterhood. She has a Bachelor’s Degree, Business Administration, Universidad Catolica in Quito, Ecuador.

May Program
Rise and Grind…Success…How Bad Do You Want It?

Dr. Hill has a Bachelors and Masters Degree in Public Administration from the University of La Verne. He graduated from the University of Southern California with his Doctorate of Education Administration in 2008. His Research interests includes but are not limited to equity in education for students of color specifically African American males in higher education and seeks to continue those efforts through practical and theoretical efforts.

Diana Loomis was born in Toronto, Canada. She has a BA in European Government and History, a BS in Speech Pathology and Audiology, and an MS in Deaf Education from John Tracy Clinic, USC. She played Maria von Trapp in “Sound of Music” and Marian in “The Music Man” for Glendale Centre Theatre many years ago. She’s painted, sculpted and created print work but also loves researching and writing about local and art history.

This lecture details the lives of Leonard John (L.J.) Rose (1827-1899) and his son Guy Rose (1867-1925) both left lasting legacies in the San Gabriel Valley, Diana Loomis will share her recent research on the fascinating story of L.J. Rose and his artist son Guy. Guy Rose was one of 11 out of 13 surviving Rose children. He was a talented California Impressionist and 12 year neighbor of Claude Monet in Giverny, France. His paintings can sell now for over $1 million

The Morning After: Finding Purpose in a Non-Profit Environment
by Susan Negrete

Susan Negrete is a resident of Palos Verdes Estates, CA and was elected Co-Chair of the AAUW Los Angeles Interbranch Council (LACIC) for the 2018 – 2019 term, having served as Chair from 2016-2018.  She joined LACIC’s Steering Committee in 2014, after regular participation in LACIC meetings since 2009.

Susan previously served as an AAUW CA Board of Directors for the 2014-2016 term, both as Co-Chair of the Leadership Committee and also as a member of the Governance Committee. She is a current member of the state’s Project Oversight Committee (which covers  the esteemed Tech Trek and Speech Trek programs), and will serve as AAUW-CA Nominations & Elections Chair for 2018 – 2019. 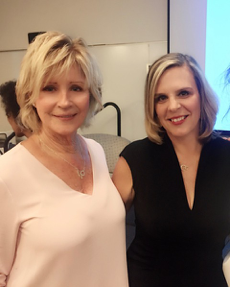 Meal Choices: Chicken Piccata, Skinny Chicken (Grilled Breast of Chicken with Vegetables) or fruit plate Parking: Free parking in back of the City Club off Madison

Please be sure to join us at the General meeting on February 16. We are pleased to have the Glendale Branch join us for this meeting.

Following our luncheon we are delighted to have as our speaker a new Pasadena Branch member, Nan Johnson. Nan retired from the University of Rochester where she taught courses in Women and the Law and Women in Politics. She founded the Susan B. Anthony Center at the University of Rochester and served as an elected member of the Monroe County Legislature for 20 years including a year as Majority Leader. In January 2019 Nan was an invited keynote speaker at the National Women’s History Alliance conference in San Diego where she was an inspiration to all who attended.

GENDER and DIVERSITY
The New Aging with Dr. Torres-Gil

A dear friend, former professor, and mentor of AAUW- member Camille Veneracion. Fernando M. Torres-Gil’s multifaceted career spans the academic, professional, and policy arenas. He is a Professor of Social Welfare and Public Policy at UCLA, an Adjunct Professor of Gerontology at USC, and Director of the UCLA Center for Policy Research on Aging. He earned his first presidential appointment in 1978 when President Jimmy Carter appointed him to the Federal Council on Aging and appointed (with Senate Confirmation) by President Bill Clinton as the first-ever U.S. Assistant Secretary on Aging in the U.S. Department of Health and Human Services (DHHS). As the Clinton Administration’s chief advocate on aging, Torres-Gil played a key role in promoting the importance of the issues of aging, long-term care and disability, community services for the elderly, and baby boomer preparation for retirement.

Taking the Reins is a nonprofit for girls which hosts programs that teach life skills to middle- and high-school girls primarily through horse care and riding. Girls living in high-density, low-income areas face unique concerns that Taking the Reins directly addresses. Jane grew up with horses in Colorado and, because of horses, came to California to attend college at Cal Poly Pomona. Her greatest passions in life are children and horses. As a mom raising her children, a psychologist working in adoption and education, and a horsewoman leading youth programming for the Region Two Arabian Horse Association, finding a way for kids to experience the wonder of horses has been a personal goal.

Mars Exploration- From Curiosity to M2020

Ms. Agrawal is a member of technical staff in the Artificial Intelligence Group (Planning and Execution Section), of the Jet Propulsion Laboratory, California Institute of Technology. Ms. Agrawal graduated from the California Institute of Technology in 2017 with a BS in Computer Science with a specialization in Artificial Intelligence. As an undergraduate, she was both a Teaching Assistant in Machine Learning and a Summer Undergraduate Research Fellow (SURF) working on Machine Learning. In prior summer internships she worked at OpenX and Boeing. Currently Ms. Agrawal works on projects involving the Mars 2020 onboard scheduler. She will discuss how she became interested in computer science, some of the challenges she faced in pursuing her academic and professional careers.